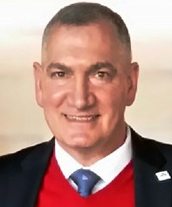 Psychiatrist Bob Koffman is Medical Director of the Semper Fi Fund. He accompanies and treats veteran Marines at sporting events sponsored by Semper Fi.  From 2011 to 2016, he served as the Senior Consultant for Integrative Medicine & Behavioral Health at the National Intrepid Center of Excellence in Bethesda, Maryland. With over 17 years of operational experience as a naval medical officer, Koffman’s operational mental health expertise is unparalleled in Navy medicine. Koffman holds a Doctor of Medicine degree from the University of Santo Tomas and a Masters in Public Health degree from the Harvard School of Public Health. He also has collaborated on numerous studies and projects, including the work of the Mental Health Assessment Teams (MHAT) and a landmark study on the psychiatric sequelae of combat duty in Iraq, and was the 2008 recipient of the Sears Award, presented to the leading Navy psychiatrist.